The workshop was a part of our research during the artist in residency program in Changdong Art Studio in Seoul for the Samalu installation. We organized the workshop to achieve a better understanding how Korean youth reflect on their mountain worship heritage and culture. In the “21st century San-shin” workshop we worked with a group of 10 young Koreans and explored the theme of San-shin mountain spirits and mountain worship through experiments that took form of site specific installations and performances. We worked on a concept with each student and everyones idea was realized, either as an installation or a performance in public space. In some projects the young artists collected courage to interact with the public. Self made good luck talisman bracelets were handed out to hikers near the entrance of Dobongsan mountain. A two person team created a story around a San-shin of love, who offered hugs for the lonely in Seoul. This performance took place in busy Myeong-dong area and showed us how interaction with the public often has unexpected results, yet offering new interpretation to ones work. In another project one of the young artist collected images of hands and recorded peoples wishes to an installation, with an interaction interface that symbolizes connection and meditative prayer.

Some of the ideas offered opportunities of relief and short moments of meditation for the busy inhabitants of Seoul. One of the young artist interpretation of mountain worship was that it offered a relief from everyday worries. Her mountain spirit ritual translated to a flash mob. Strangers informed trough social media channels met in Insa-dong to jump for one minute, shearing a moment of energy relief in their busy lives. In another project small characters made of metal wire, with led light hearts and QR-tags offered meditative music and philosophic quotes for curious by passers bringing sentiment and something lyrical in their everyday life.

Other students took their inspiration from current topics and news. During the workshop period South Korea was affected by the heaviest rains in 100 years. Floods and mudslides killed several people. One of the students made a project questioning if these mudslides could have been prevented. The work exposes the notion that with all technology and development we are still unable to control nature. It connects to the core of mountain worship and folk beliefs that often related to good fortune with weather and crops. Another politically connected artwork deals with the current dispute between Korea and Japan, over the ownership of the Dokdo islands. A shamanic like ritual for the Dokdo San-shin was performed in Dream Forest reflecting on how throughout history religion has been instrumentalized for political and economic means both in Korea and elsewhere.

The next step of the workshop was to combine the documented artworks from the young artist to one interactive video installation. We presented various sensors and human-computer interaction methods to the young artist. Together we designed how the documentation video of each individual artwork was connected to an interaction interface. At the exhibition this interactive installation reflected interpretations of how mountain spirits, mountain worship, old folk believes and shaman rituals can be translated to values and actions in the life of young Koreans. The discussions, artworks and personal connections with the young artists brought us a deeper understanding of how young Koreans relate to the San-shin theme. We hope that during the workshop the young artists were able to develop a sense of proudness over an unique cultural heritage that unfortunately is still neglected in Korea. The interactive installation was exhibited 17.8-27.8.2011 in the Standingby 000 exhibition at Dukwon Gallery in Seoul. 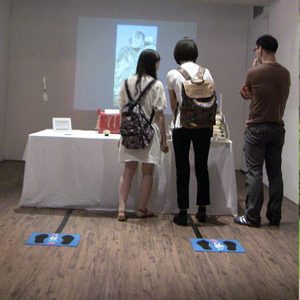 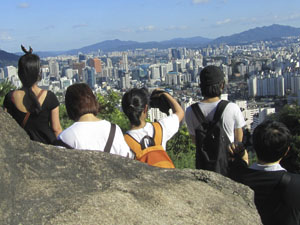 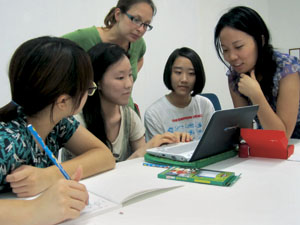 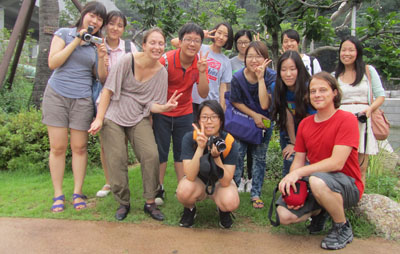