While visiting Berlin for the transmediale we stumbled on the Ars Electronica Export exhibition at the DRIVE Volkswagen Group Forum. The artworks were were very professionally curated into the space and it was not too disturbing with the show case cars in between. To my joy there was a number of artworks that related to Machine Vision. Some of them I have seen at earlier editions of Ars Electronica, yet some of them were new to me. Below some of my documentation from the exhibition with artwork abstracts copied from the exhibition webpage. 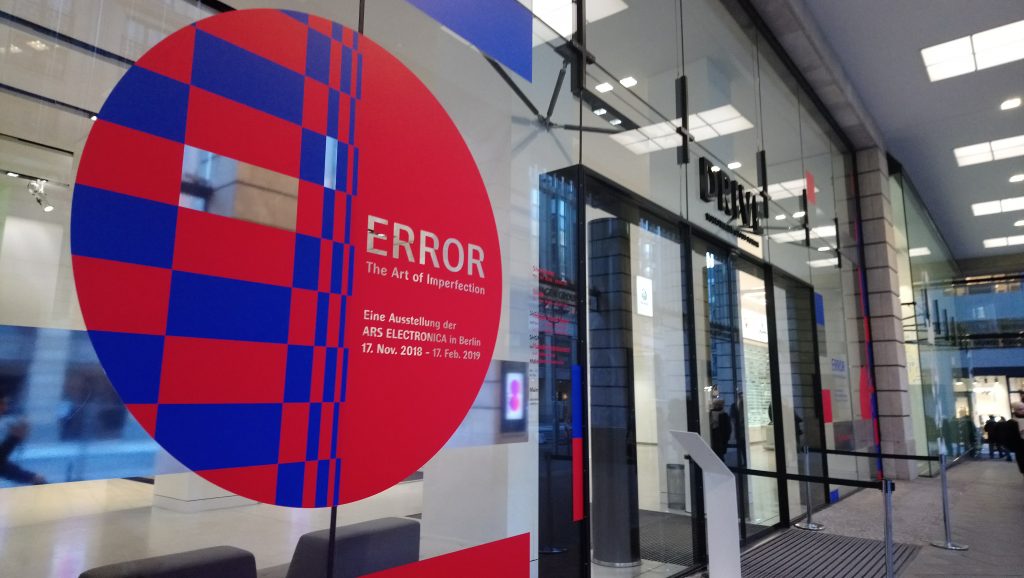 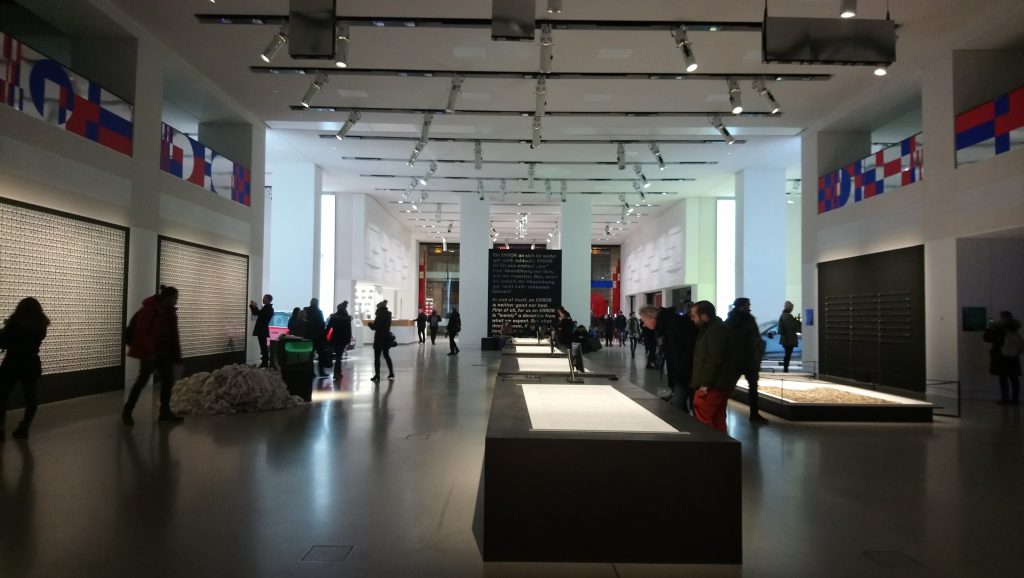 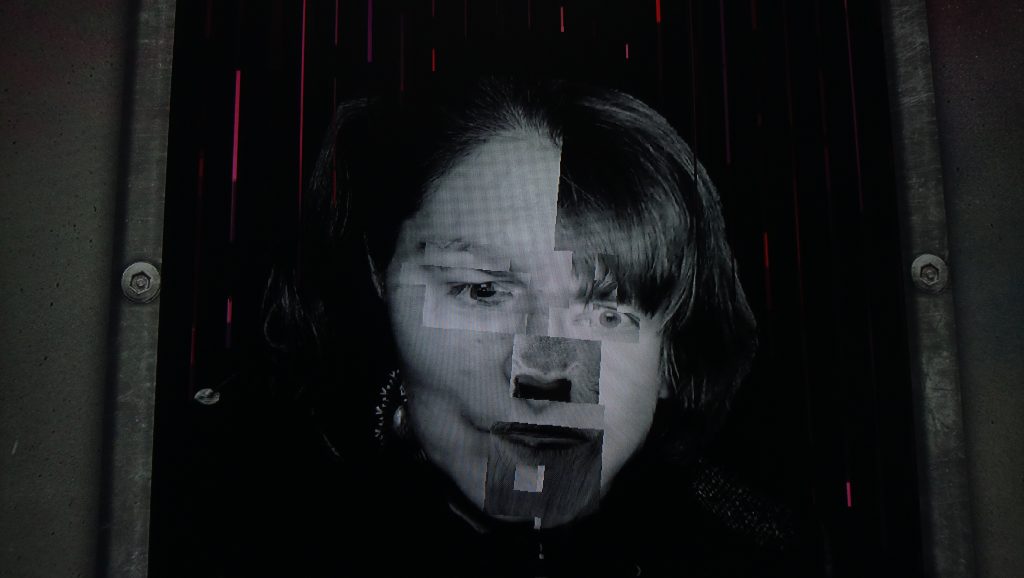 Echo is a bridge to another person’s memory, identity and intimate experience. The key intention of the work is to generate empathy and connect strangers through an exchange of facial identity and storytelling. Seated inside a graffitied photo booth and guided by an AI character, you slowly see another’s face morph into your own, driving your features with their expression. When you record your own story, layers of yourself are echoed in the other. What story will you share with a stranger?
Creative Producer: Kendyl Rossi (AU/CA)
www.electric-puppet.com.au 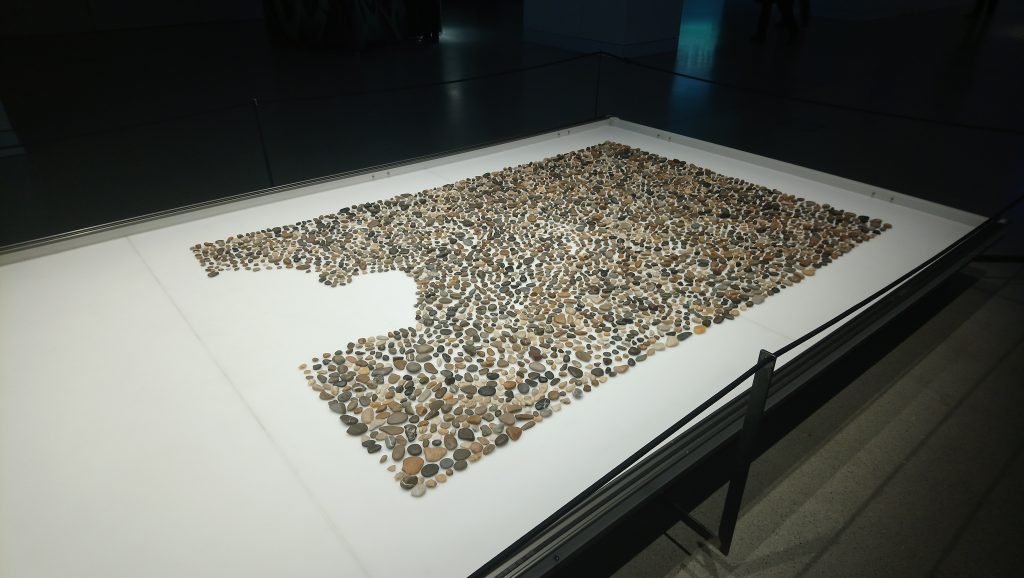 Jller is part of a research project on industrial automation and historical geology. The apparatus sorts pebbles from the German river Jller by their geologic age. The river carries pebbles that are the result of erosions in the Alps, and those from deeper rock layers once covered by glaciers. The machine uses computer vision to sort the stones by colors, lines, layers, grain and surface texture, and classifying them into age categories using a manually trained algorithm.
www.prokopbartonicek.com
www.allesblinkt.com 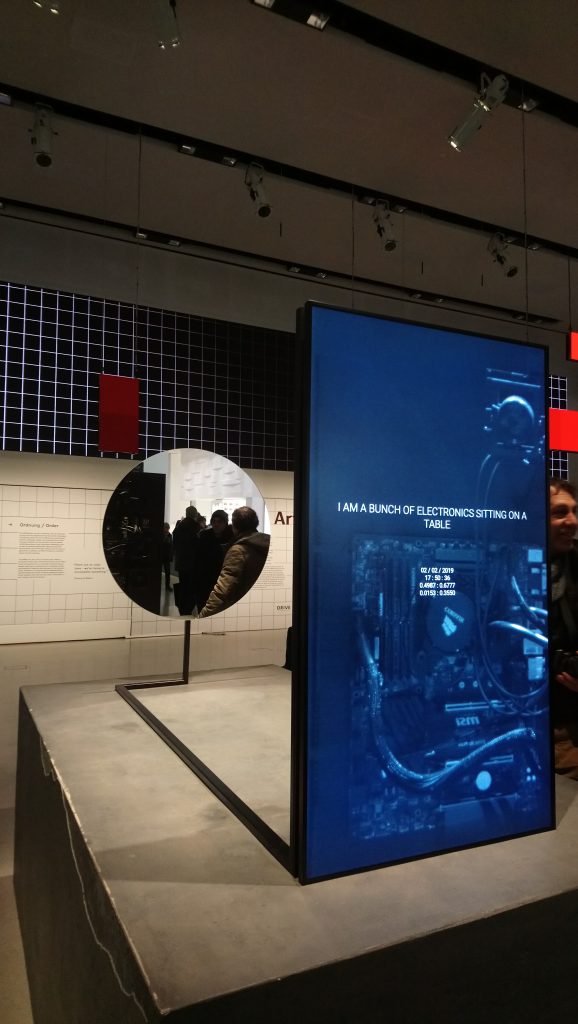 The human ability of self-perception and our urge to question, research, pray and design have long been unique in the world. But is this still true in the digital age? Narciss is the first digital object that reflects upon its own existence by exploring its physical body with a camera. An AI Algorithm translates the observations into lyrical guesses about who it thinks it is. The algorithm simulates human cognition from a behavioural perspective. The resulting rapprochement of man and machine questions our self-image and our raison d‘être.
waltzbinaire.com 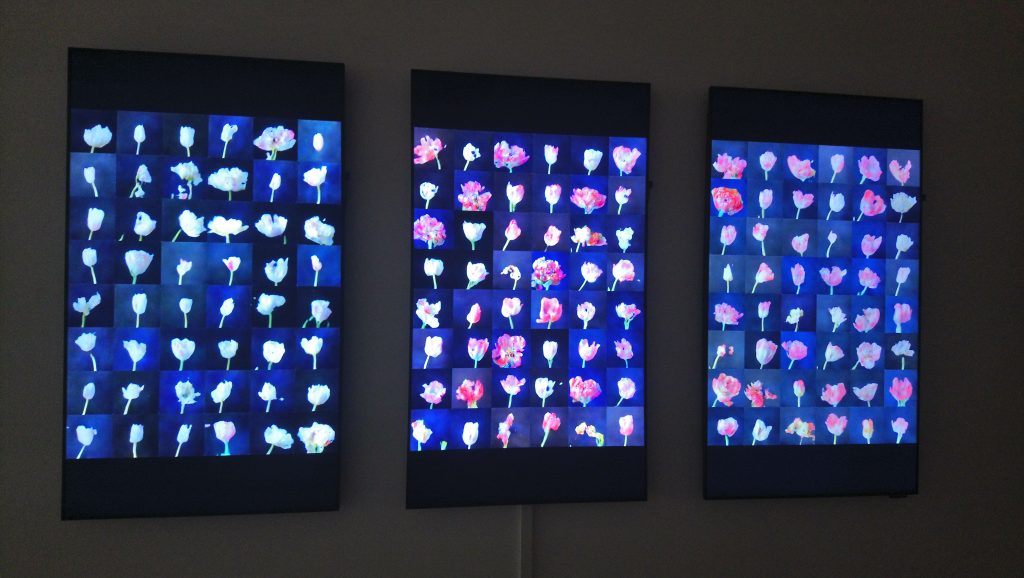 Mosaic is the name of the tulip virus responsible for the coveted petal stripes that caused the speculative prices during the ”tulip mania” in the 1630s. This work draws a parallel to the current speculations around cryptocurrencies, showing blooming tulips whose stripes reflect the value of the Bitcoin currency. Echoing how historical still lifes were painted from imagined bouquets rather than real ones, here an Artificial Intelligence constructs an image of how it imagines a tulip looks like.
This work has been commissioned by Impakt within the framework of EMAP/EMARE, co-funded by Creative Europe. 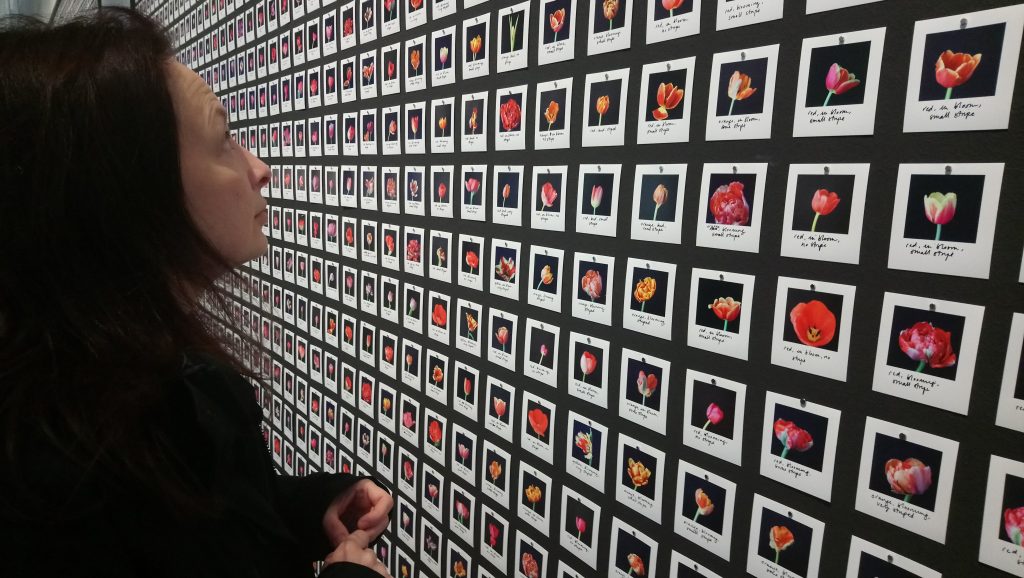 This work is the training data set for the parallel work Mosaic Virus. Ten thousand, or a myriad, tulips were photographed and sorted by hand by the artist according to criteria of color, type and stripe — a work that is the basis of any database for machine learning. The images reveal the human aspect that sits behind machine learning and how the labels are often ambiguous. How objective can artificial intelligence actually be when it is repeating the decisions made by people? And how difficult is it to classify something as complex as gender or identity when it is hard to categorise a white from a light pink tulip? 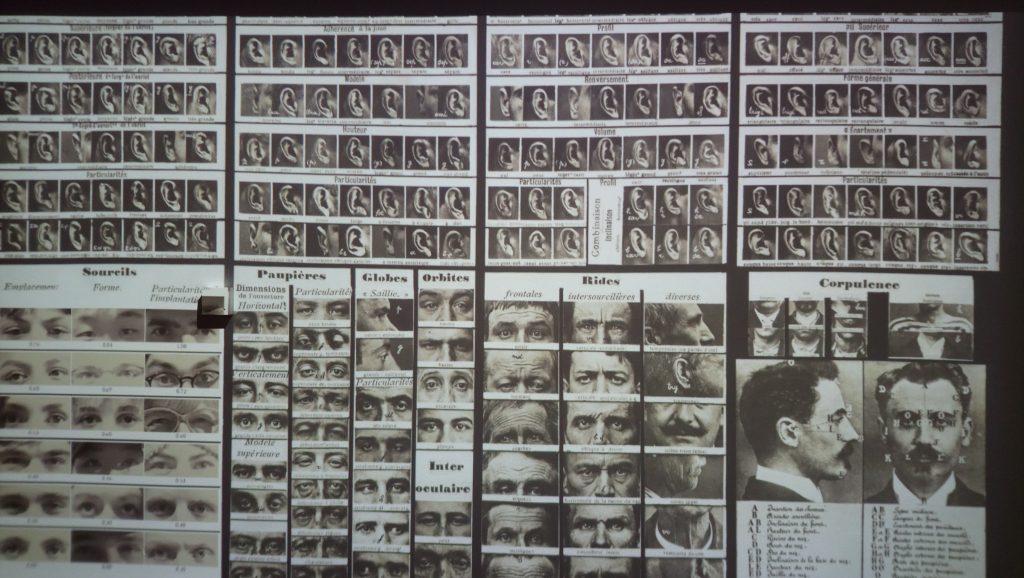 Early scientific methods to standardize, index and categorize human faces were adopted by the Eugenics movement as well as the Nazis to criminalize certain face types. Alan Turing, considered the founder of computer science, hoped that algorithms would transcend this systemic bias by categorizing objectively, and end the criminalization of deviations like his own homosexuality. But how do algorithms identify a “normal“ face? And how do we?
mushon.com
stavdan.com
eranws.github.io 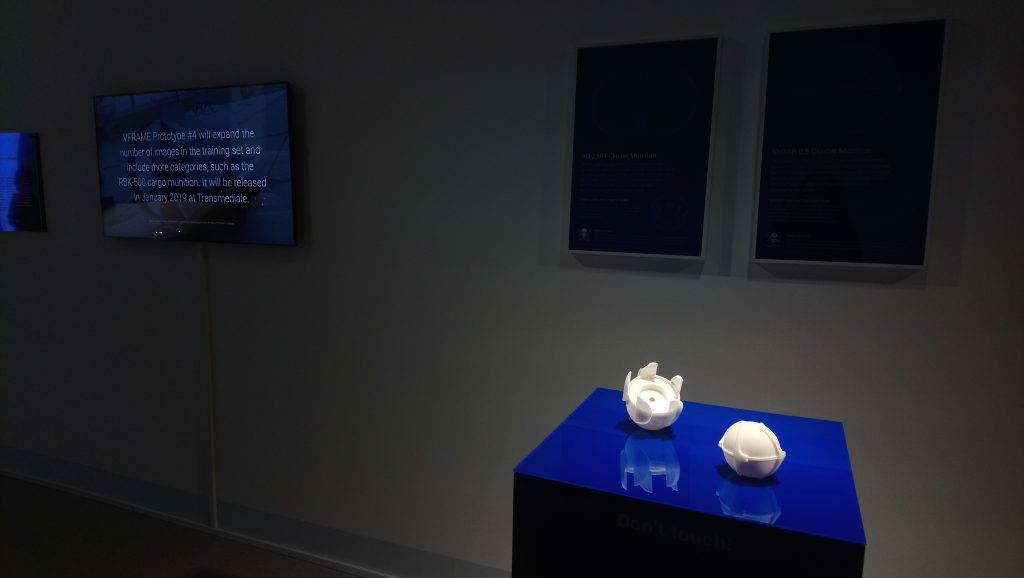 VFRAME is an open source computer vision toolkit designed for human rights researchers and journalists. VFRAME is currently working with the Syrian Archive, an organization dedicated to documenting war crimes and human rights abuses, to build AI that can automatically detect illegal munitions in videos. Their current research explores the use of 3D modeling and physical fabrication to create new image training datasets.
ahprojects.com