Together with Martine Neddam we are invited to jury this years Stuttgarter Filmwinter Expanded Media exhibition.

Artistic works from the competitions Media in Space and Network Culture are on display, which includes cross-border formats such as performance, installation, Expanded Cinema and Net Art like interactive web or social web projects or interventions at public and virtual spaces. As in previous editions of the Filmwinter Marcus Kohlbach organized and curated the exhibition.

The performances and artworks:

“Suppléments d’âmes” (Supplements of souls) is a work which in a very contemporary way allies several artistic disciplines: literature, dance and video art. Initially, it is a text evoking a body that can carry and claim an idea and sublimate it. Then, it is through dance that this idea is embodied: in the half-shade, a dancer who is only visible by the video projection of images on her body. Images of bright rays of light which spin to draw her silhouette in movement – and create a poetic and magic vision. 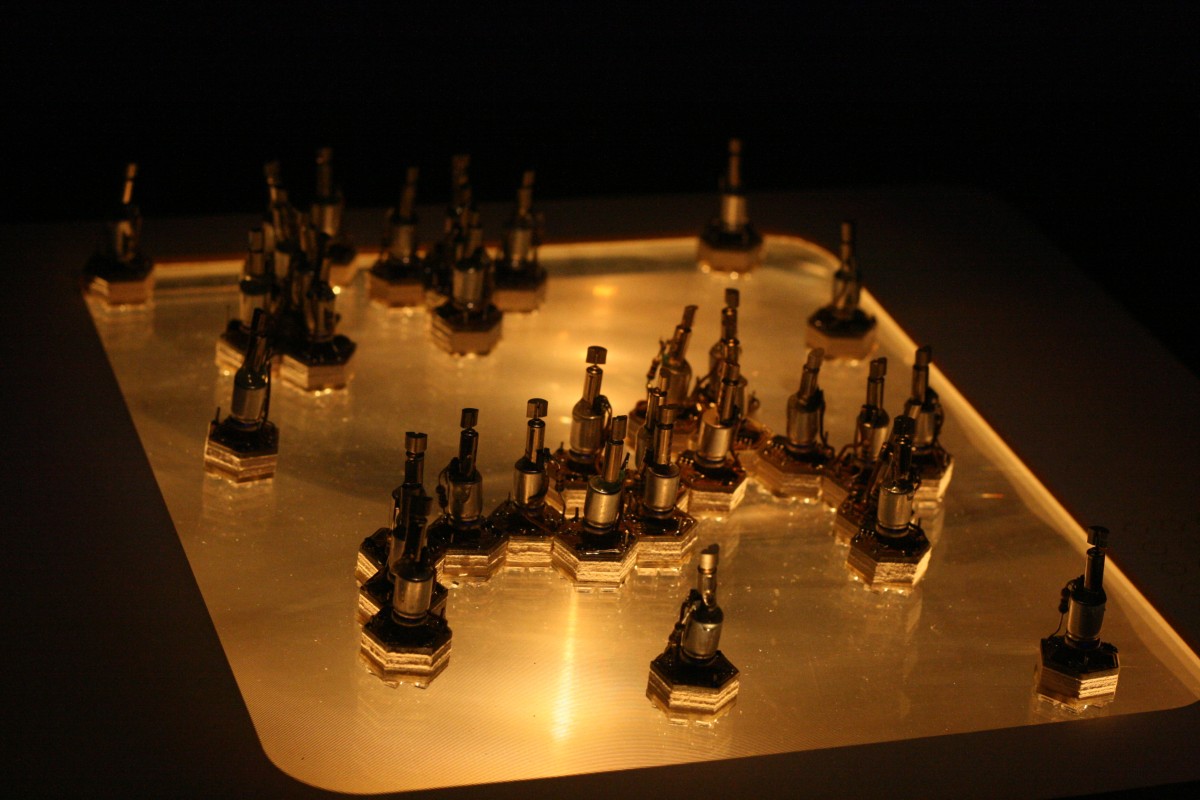 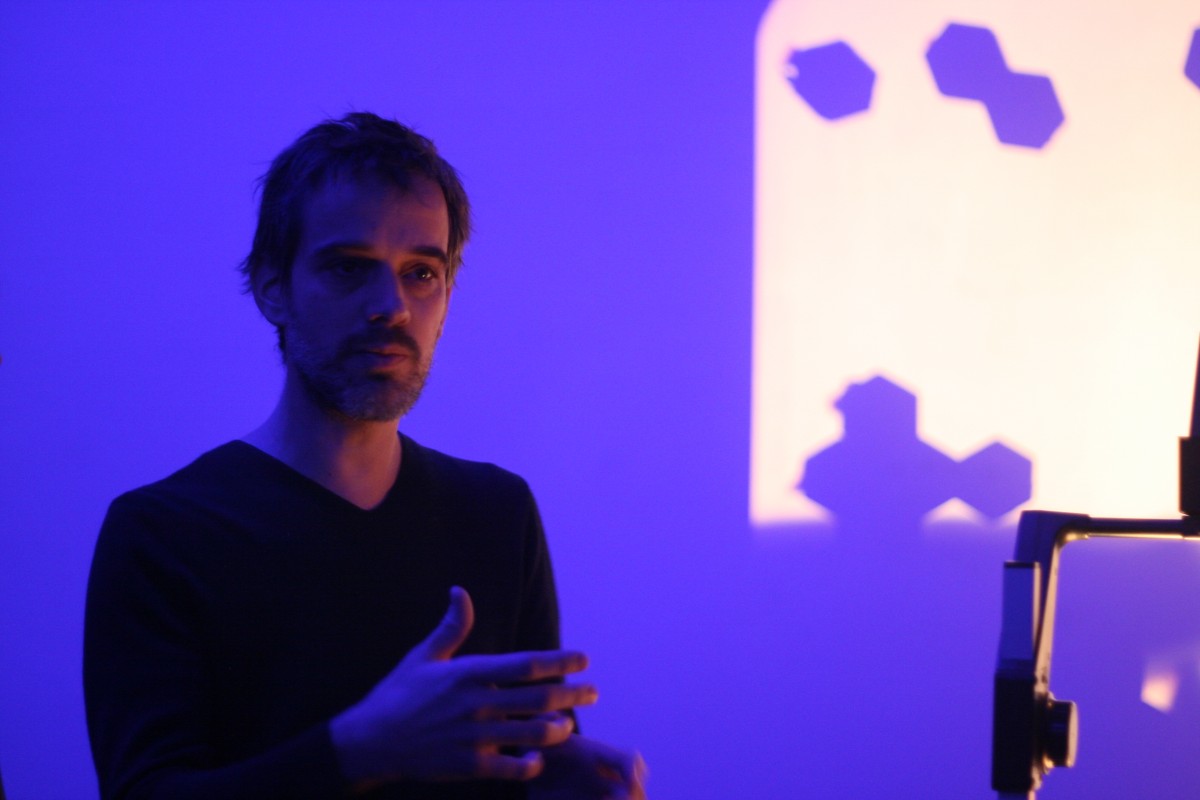 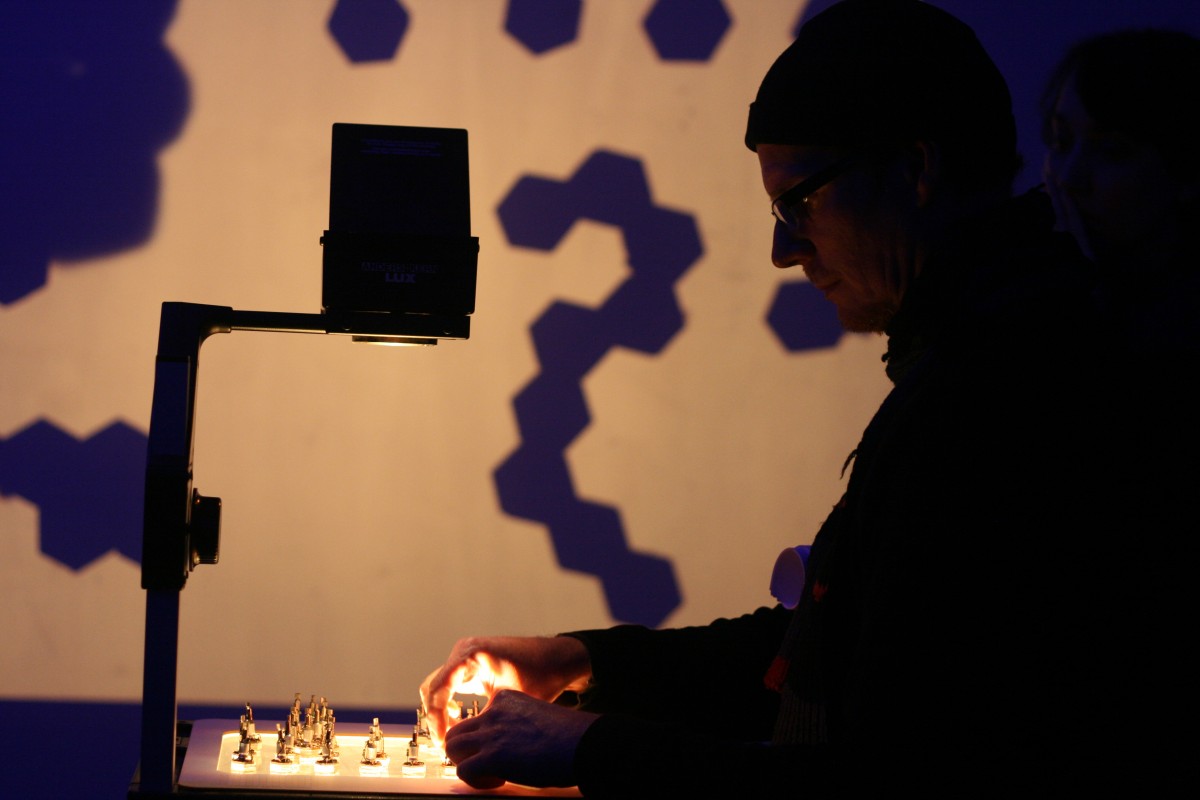 The crystal forming robots are a physical simulation of a growth process, similar to the growth of crystal structures. Each robot operates autonomously and is driven by the light of the overhead projector. When a robot has collected enough energy it is all released at once through a small motor and the robot will make a random movement. The robots are equipped with tiny magnets, so that when they come close while they are moving, they attract each other. Over time a crystal like structure emerges from more and more little robots forming larger clusters. Through the overhead projector this process is magnified and an abstract movie of the real physical robots is projected to the wall.

The background of this project is research on systems of growth, self organization and plastic change. The core idea to use robots to make the process of growth tangible and to develop an experimental system to study growth and the self-building of networks. 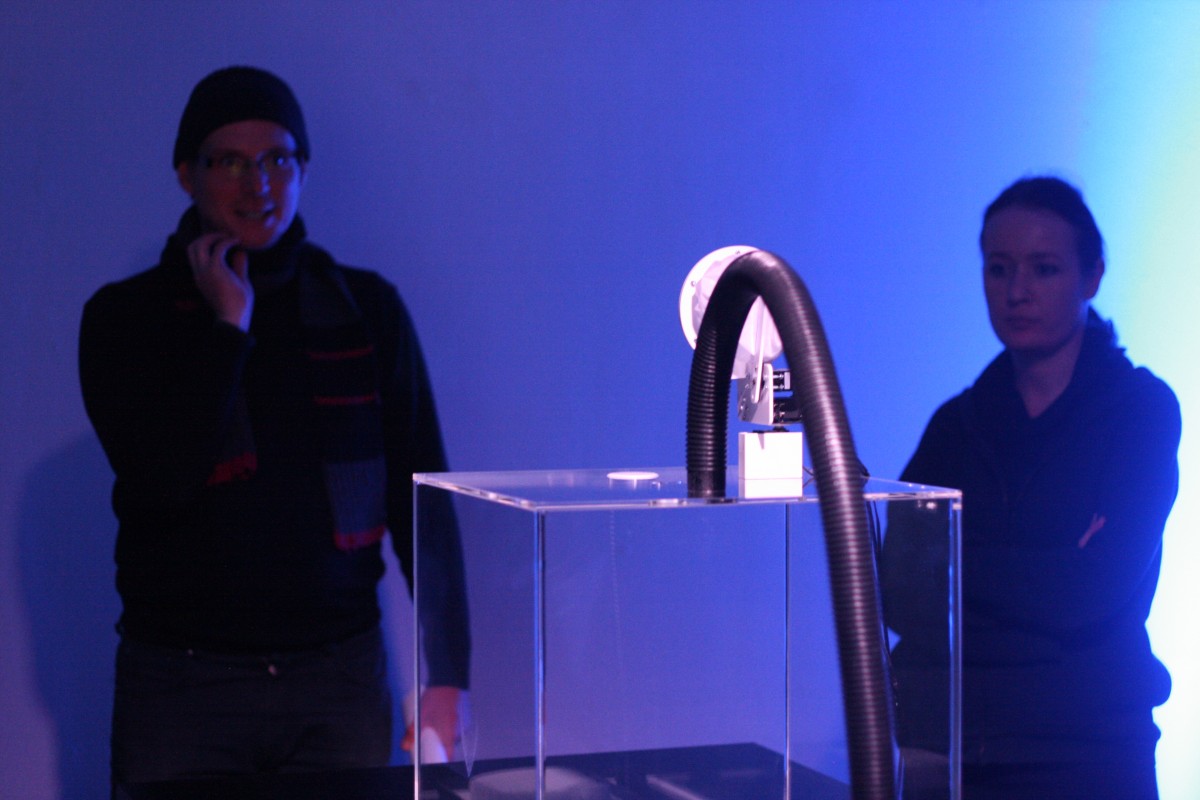 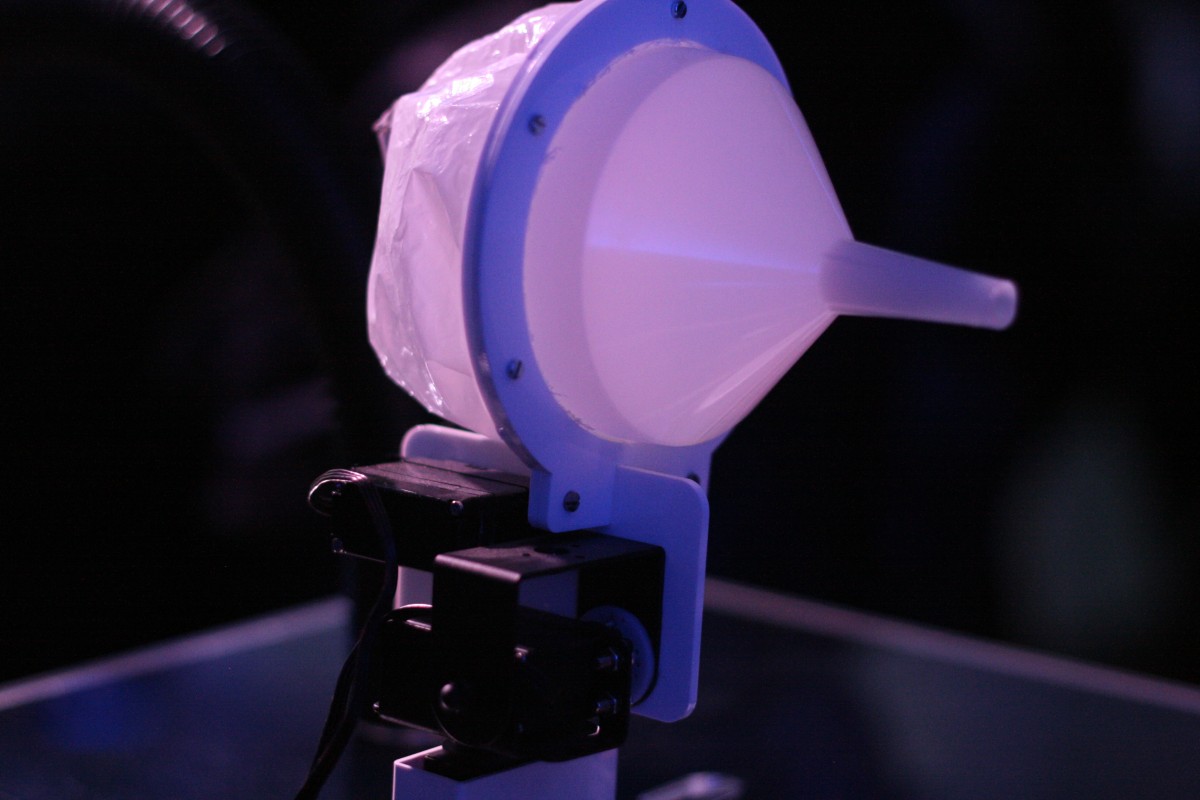 A soap bubble usually remains stable for only a few moments – it is a perfectly formed sphere with an iridescent surface that reflects its surroundings. As one of the classical vanitas symbols the soap bubble traditionally stands for the transience of the moment and the fragility of life.

THE LONG NOW approaches the soap bubble from a contemporary perspective – with reference to its chemical and physical properties as well as recent scientific and technological developments. The project is aimed at extending the lifespan of a soap bubble, or even to preserve it forever. Using an improved formula, a machine generates a bubble, sends it to a chamber with a controlled atmosphere and keeps it there in suspension for as long as possible. The project is presented in the form of an experimental set-up in which the newly created soap bubble oscillates permanently between fragility and stability.

Realised within the framework of EMARE Move On at OBORO’s New Media Lab, Montréal, and a residency at Rustines|Lab, Perte de Signal, Montréal, Canada. With the support of the Culture 2013 Programme of the European Commission, the Goethe Institut, CALQ and FACT.

Performance with a Wash Bowl

The viewer observes a female body, placed in a neutral setting, carrying a heavy iron wash bowl, filled with water. The body position is on tiptoe (an attempt to simulate a ballet position, which is to be seen as aesthetically pleasing.) We hear a monologue from Jean Luc Godards Vivre Sa Vie (A Life To Live, 1962). In a dynamic interplay with the picture: the casual and lightly tossed phrases spoken by female voice become a self-imposed rule or even a maxim. Here the irony can be seen between the celebrated grace and femininity and the heavy burden / responsibility of a modern woman. It’s about holding out. It’s all about balance.

Justice has been done! 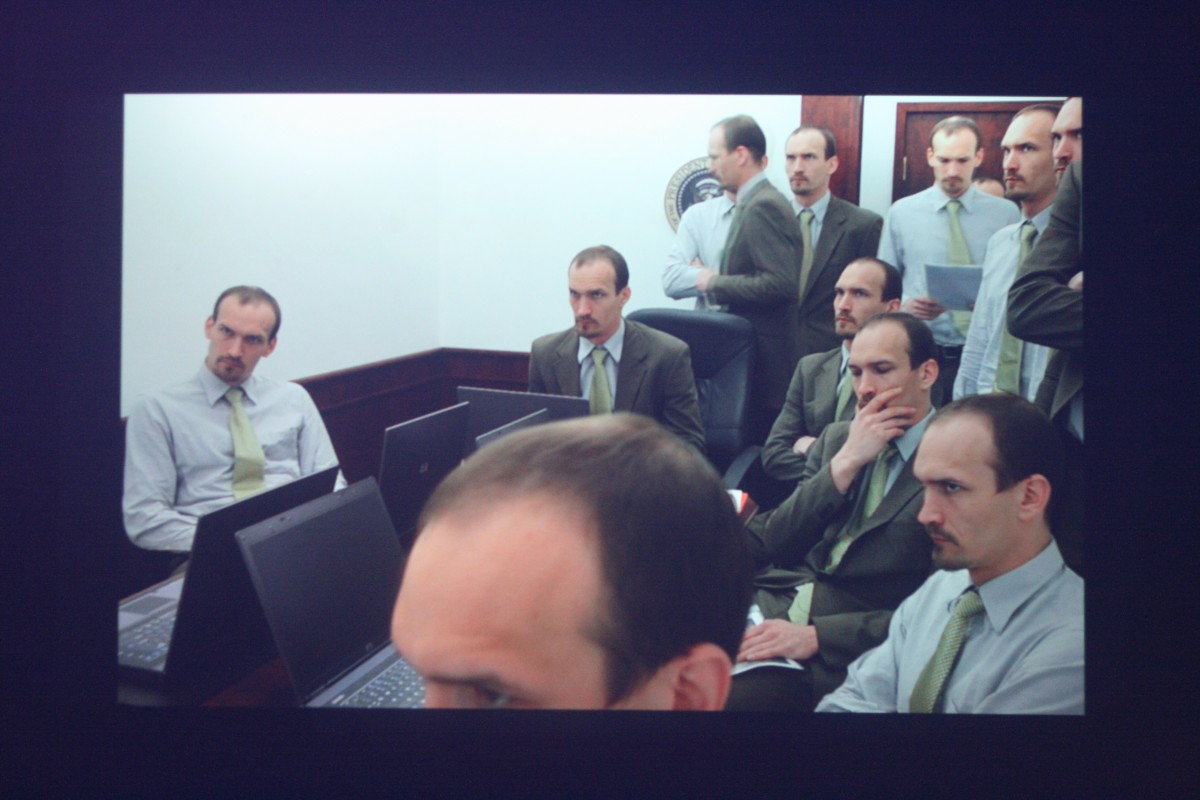 A person enters the room, walks through to each of the 13 positions of the people on the original Situation Room picture and tries to imitate their positions and postures as true to the original as possible. The person begins to multiply being all of the 13 persons at the same time. For a brief moment, the reenactment of the photographic staging is perfect. All of the 13 figures are simultaneously coinciding in their posture with their respective antetype in the picture. While the speech is nearing its emotional climax, the dice in the Situation Room have long been cast. The perfect moment of the picture is gone and the rest is history. Justice has been done! 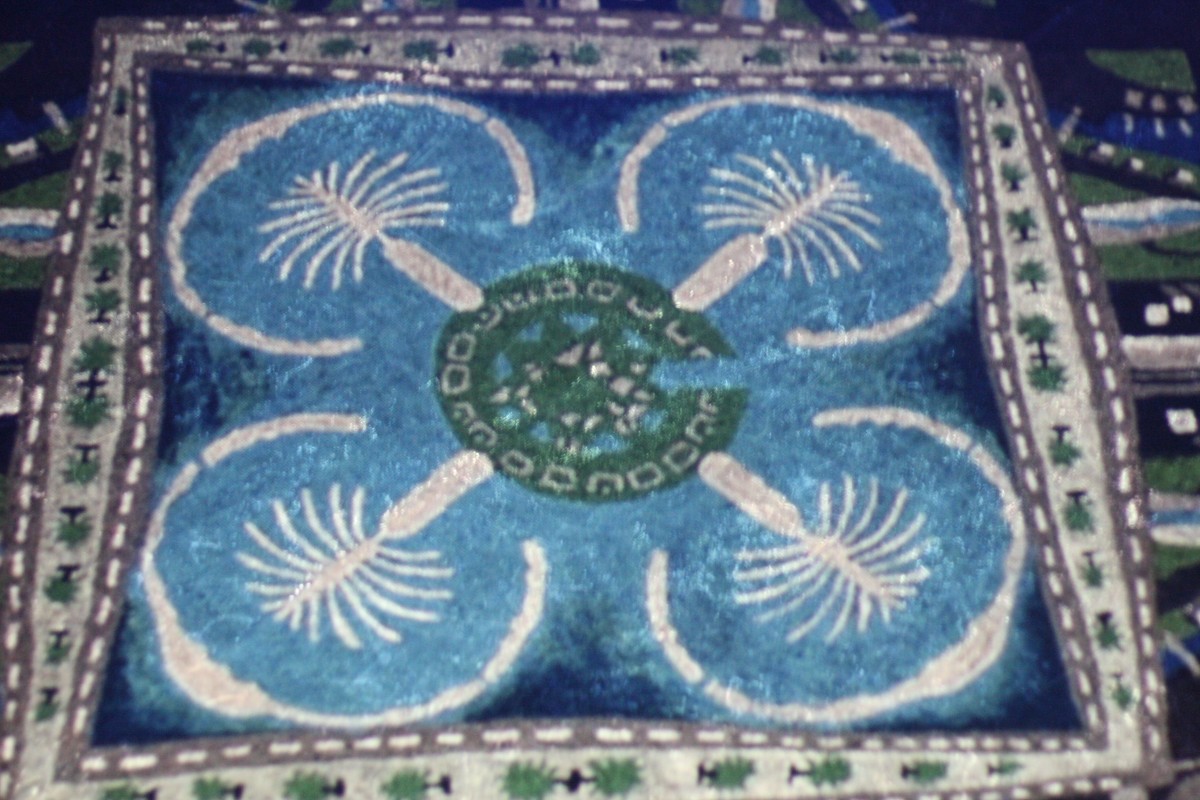 3D animations are typically used by architects to make their designs more vivid. Often a wonderful world is drawn, which seems to be almost perfect. Colossal structures, skyscrapers or apartment buildings, mostly built of ferroconcrete, appearing in the most dazzling colors. The building boom seems to have no limits. But one problem is looming already: The sand needed for the production of concrete runs short. Most natural, easily accessible sand deposits have been exploited, this makes the industry turning to the sand on the sea floor. The results are sinking islands, disappearing beaches and the marine ecosystem is severely damaged.

The video documents the time-consuming creation of a sand mandala. The completion took the artist four days, in the video the process is abbreviated to 120 minutes. The single motifs that make up the mandala, were taken from 3D visualizations of architectural designs. After the completion of the image, the sand is swept back together.

Art is of the Clickual Moment

Art is of the Clickual Moment. In the name of art we do things with clicks. You and your friends are cordially invited to perform and play with words and concepts: www.transordinator.de/edition/ 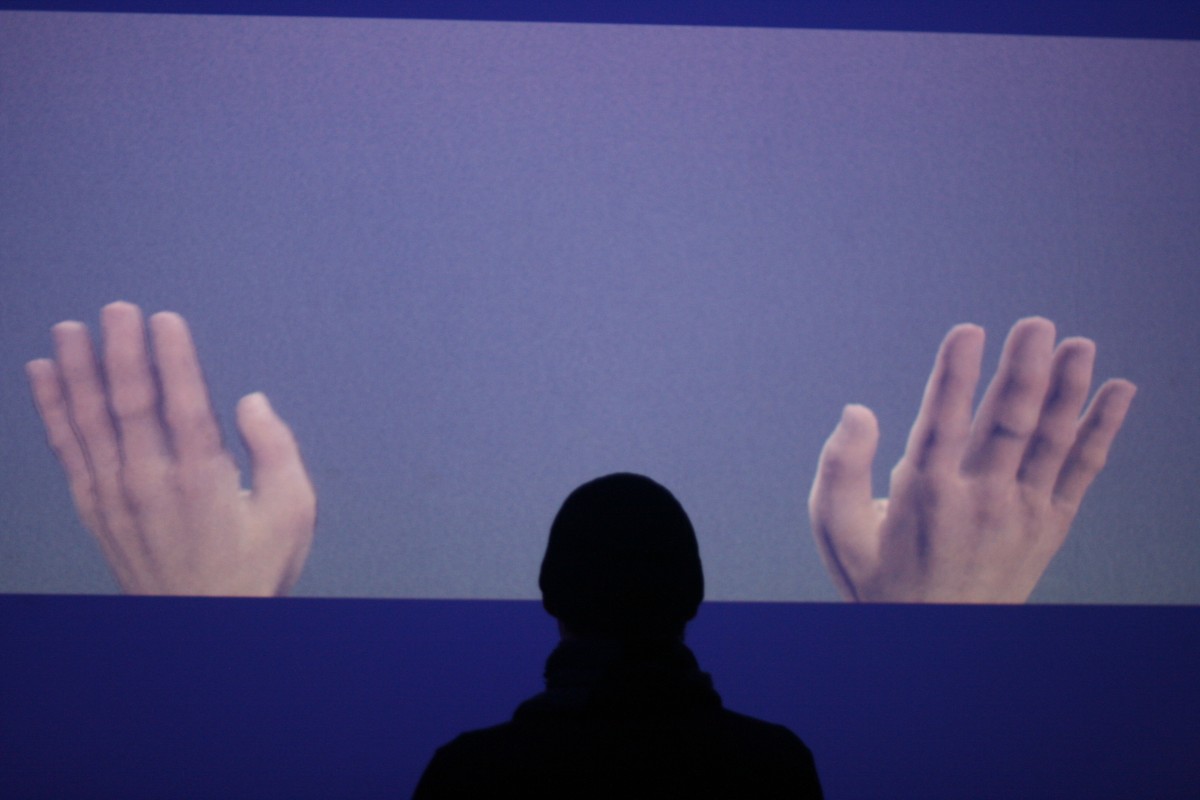 A contemporary update and a creative reworking of Albert Camus’s “The Myth of Sisyphus”, “S for Sisyphus” is an experimental video game project aiming to explore action, meaning, and human intentionality via a simple animated and playable experience.

“S for Sisyphus” attempts to restage the existential ordeal and its ramifications as implicated in “The Myth of Sisyphus”. The rolling of the boulder in the original ancient myth, now replaced by the repetitive tabbing of a computer key, is equally if not more absurd and monstrous. In parallel, the game also framed and presented itself as a kind of meta-game that questions the meaning of action in video games and game playing. In both scenarios, the video game player, the potential absurd hero of the digital age, will be confronted with the question of action and its futility, while despairing, searching and making meaning in his or her own way via a playable form that resonates with our contemporary state of being. 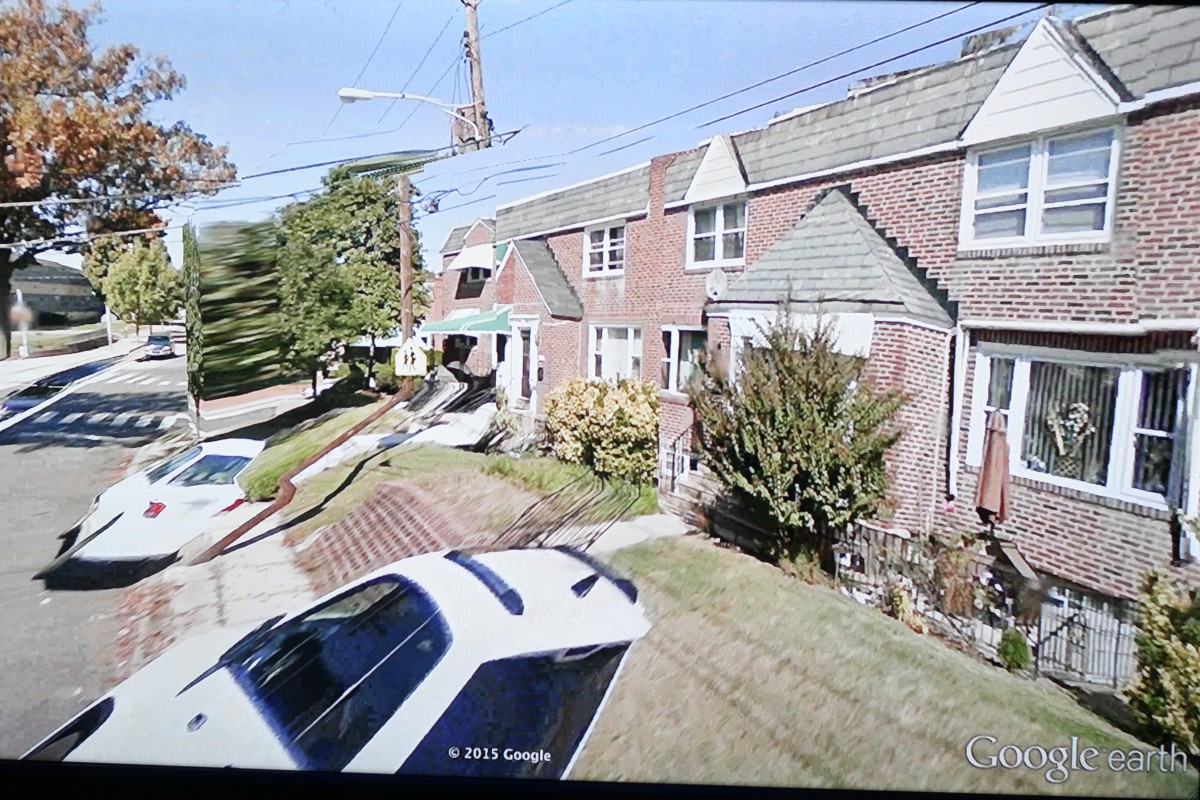 “The Mailman’s Bag” shows one hour of a Philadelphia mailman’s bag during its daily live, delivering mail from door to door. Two worlds, the realistic sound and the weird automated 3D glitch of Google Streetview, never totally meet. It is in the gap between those, that the poetry of the work emerges.

Sounds were recorded directly from the bag in a “binaural” way, meaning that we hear what the bag would be hearing, if only it had ears. This way the bag becomes equipped with “humanity” and becomes the protagonist. As the bag never parts from the mailman’s body, the recording stays very close to the moment to moment interaction of mail delivery. During the recordings no crew was present. It was just the bag, recording itself in a for bystanders invisible way.

The work finds a balance between the empathy and the surveillance “states of mind”. It creates a new cinematographic experience, an intimate window into The Everyday. The movements play out in the virtual world of Google Street View forcing its own algorithms to create an alienating Glitch, a distorted space, a contemporary cubism painted in pixels. 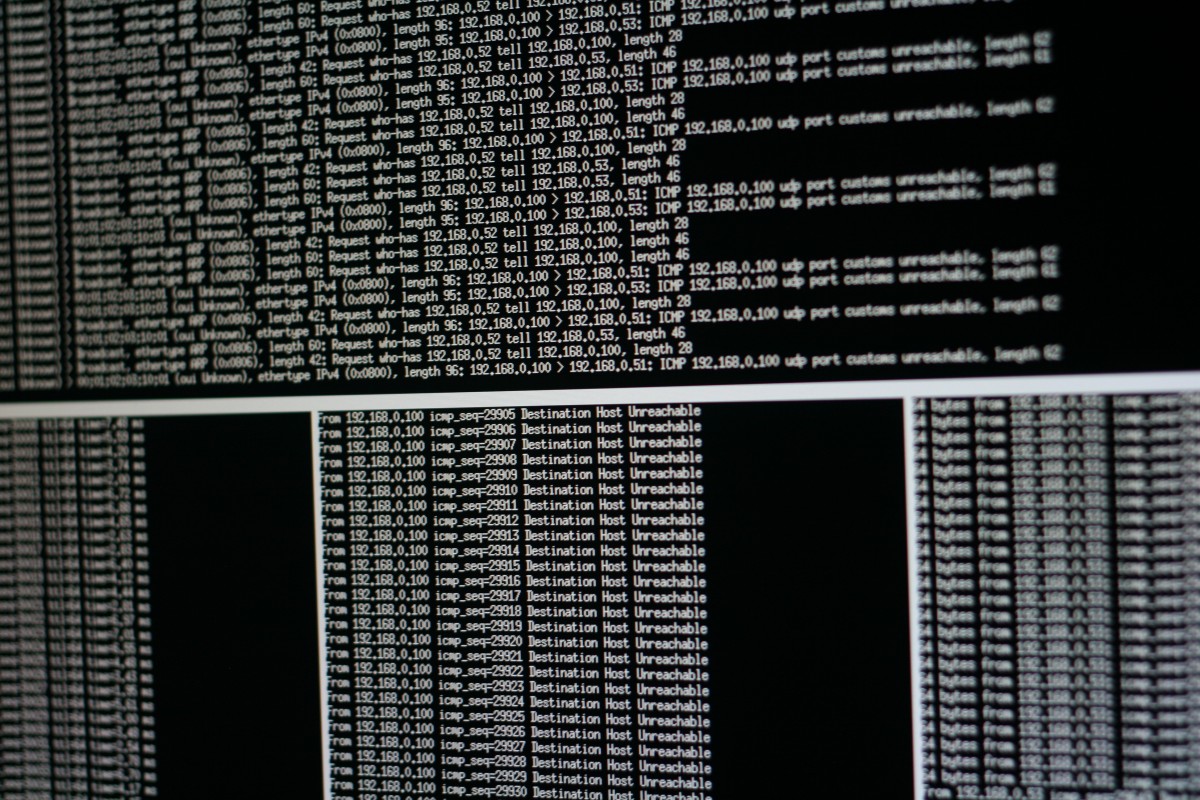 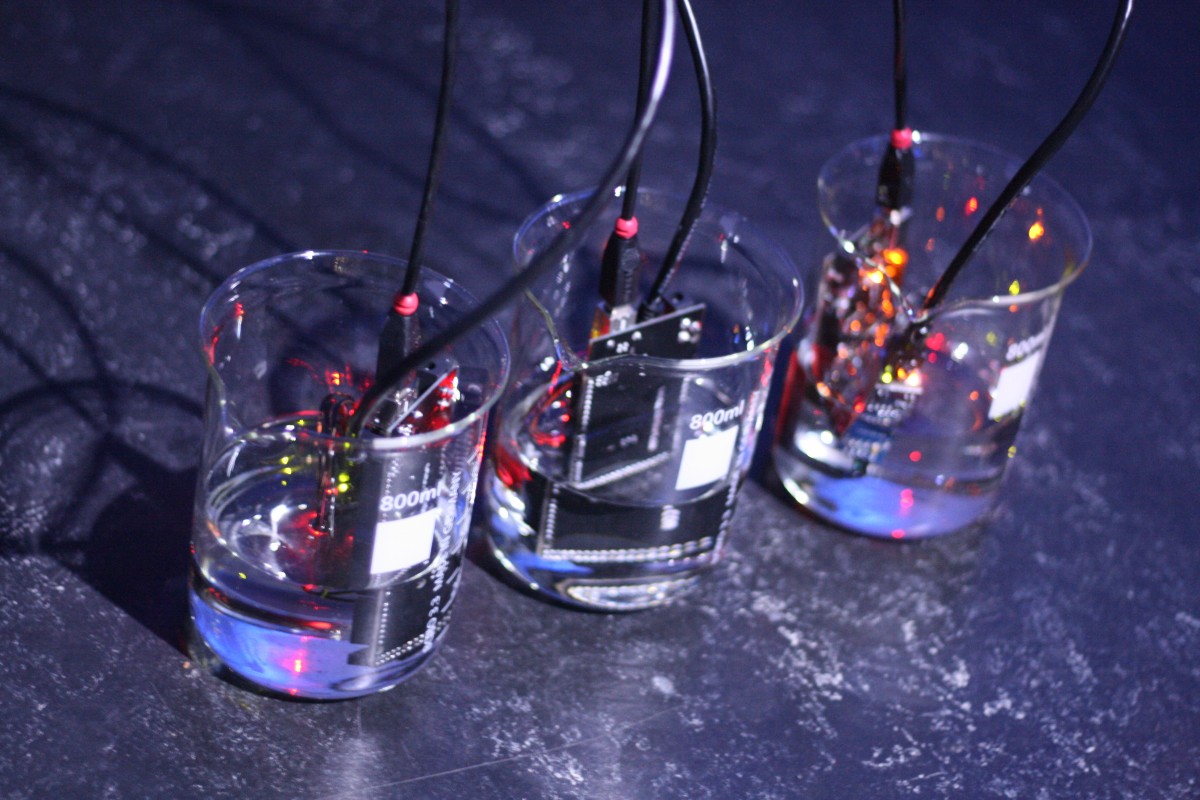 Drone Garden is showing a network of microcontrollers fighting for bandwidth in a network using basic electronic warfare strategies. Their behavior is surveilled by a computer program that runs on a machine which is also part of this network. The installation forms a utopical technogene garden whose “plants” are independent electronic agents and its aesthetics is derived from computerforensic analysis as conducted in IT security laboratories. The microcontrollers are fighting for resources like plants are competing for sunlight while they are floating in beaker glasses filled with a liquid just like young plants that are put into water for acceleration of growth.

The installation is challenging the issue of electronic warfare (cyberwar) and reframes it as an intrinsic feature of a global communication network by exposing the inherent security flaws of the network protocols used worldwide. Drone Garden is furthermore addressing the question of naturality of a technogene system, understanding survival as an indicator for life and therefore raises the question of an ethical framework for our human interaction with the closed network system as well as the emergence of a universal machine ethics. 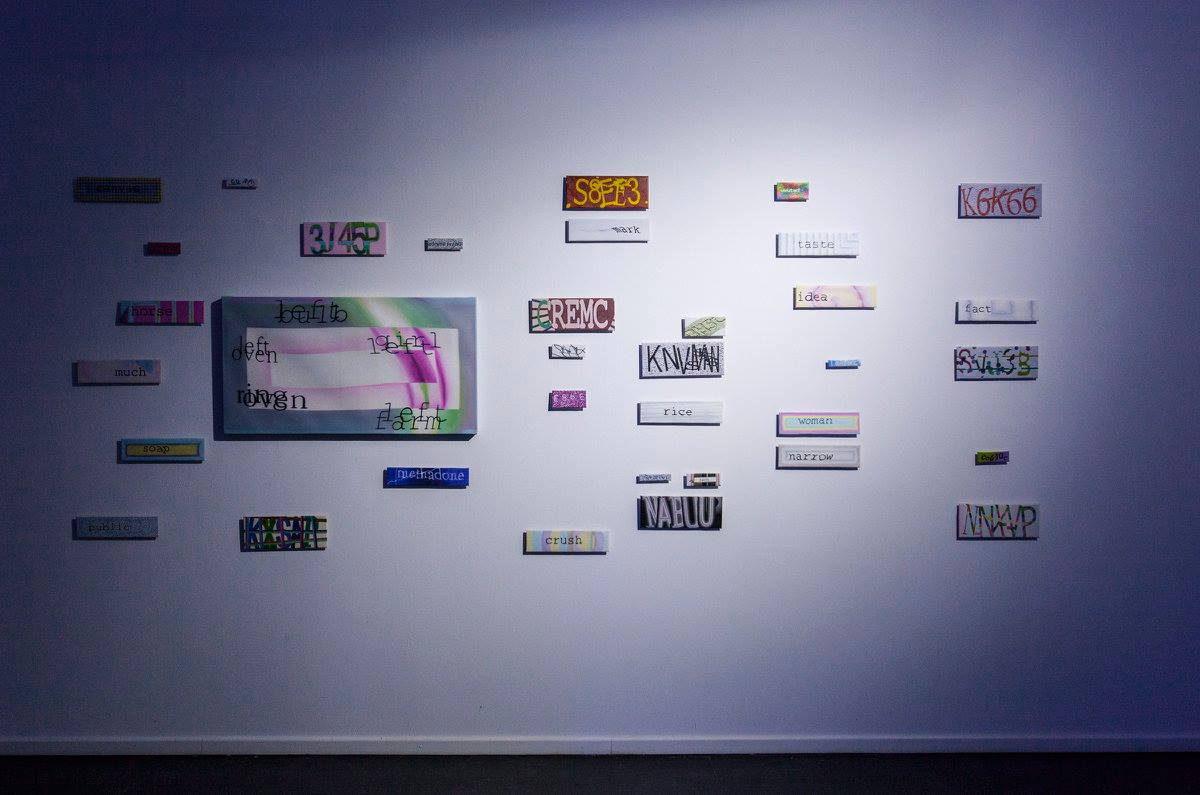 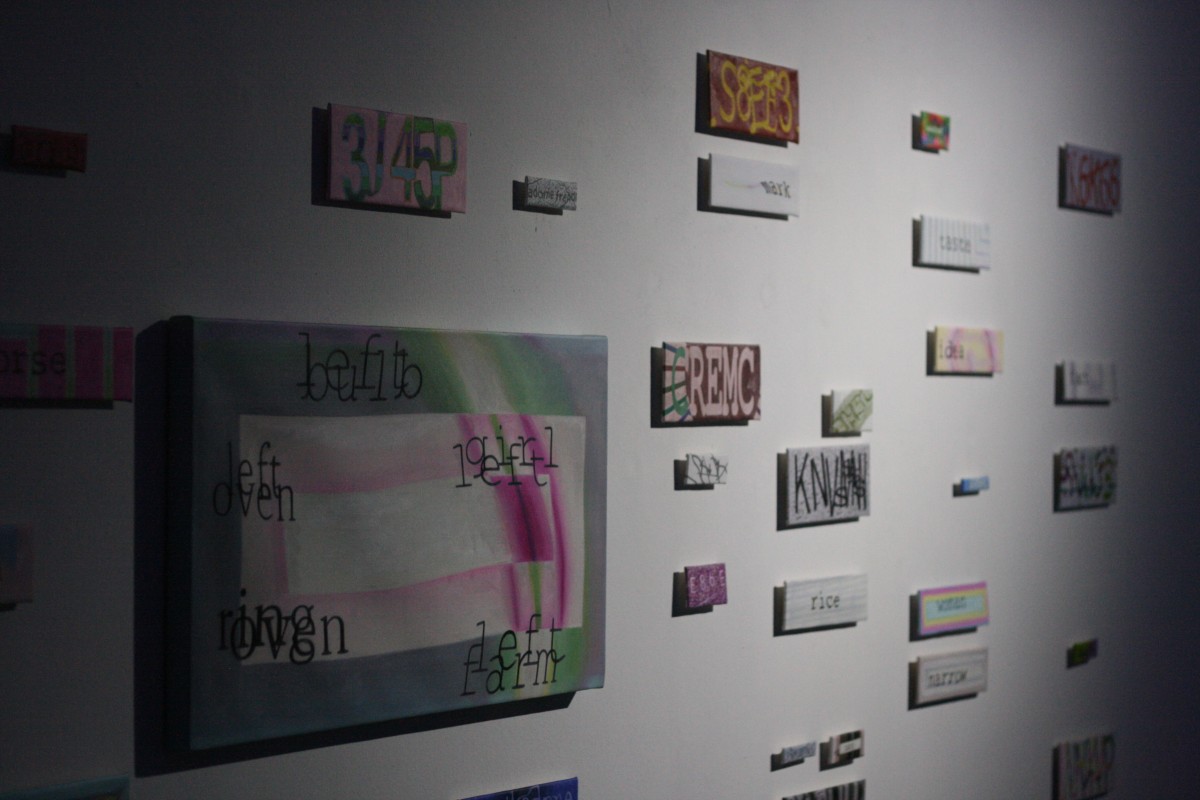 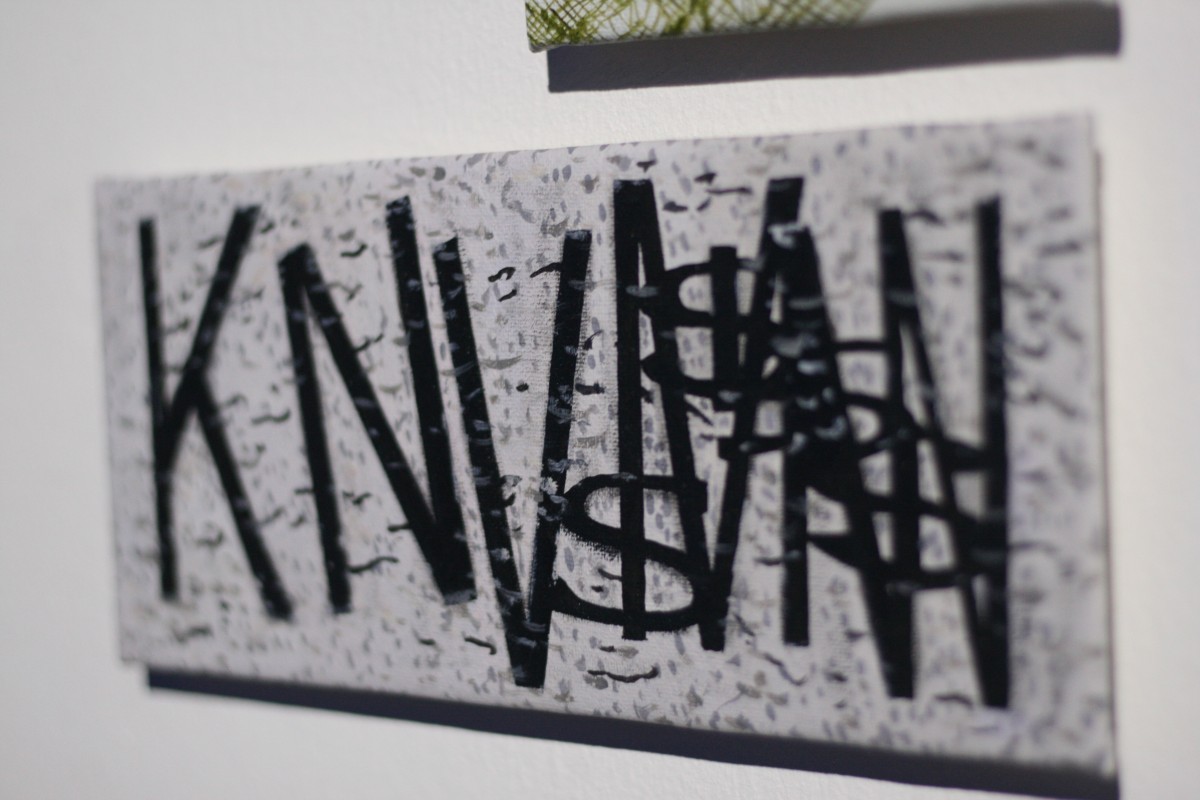 THE CAPTCHA PROJECT aims to highlight the undefined boundaries between humans and machines, originals and copies. The project was inspired by a reflection on immaterial labour and artistic practice in a neoliberal network society.

The project takes the form of a series of paintings created by Chinese painters from the village of Dafen. Despite the fact that their work consists of a mechanical reproduction of preexisting images for the Western market, Dafen painters consider themselves artists and value their work. I signed an agreement with them, splitting the costs and profits of this project in half and sent them screenshots of CAPTCHA codes, which they transformed into accurate oil reproductions.

CAPTCHA codes aim to obstruct criminals and companies whose goal is to use online services en masse, using bots and automated processes. They are easy for humans to decipher, but impossible for bots. However, it is possible to replace bots with human workers in poor countries, who manually solve thousands of tests every day. CAPTCHA was invented partially to distinguish humans from machines, but its effect is the partial transformation of other humans into machines.

…and the winners are: